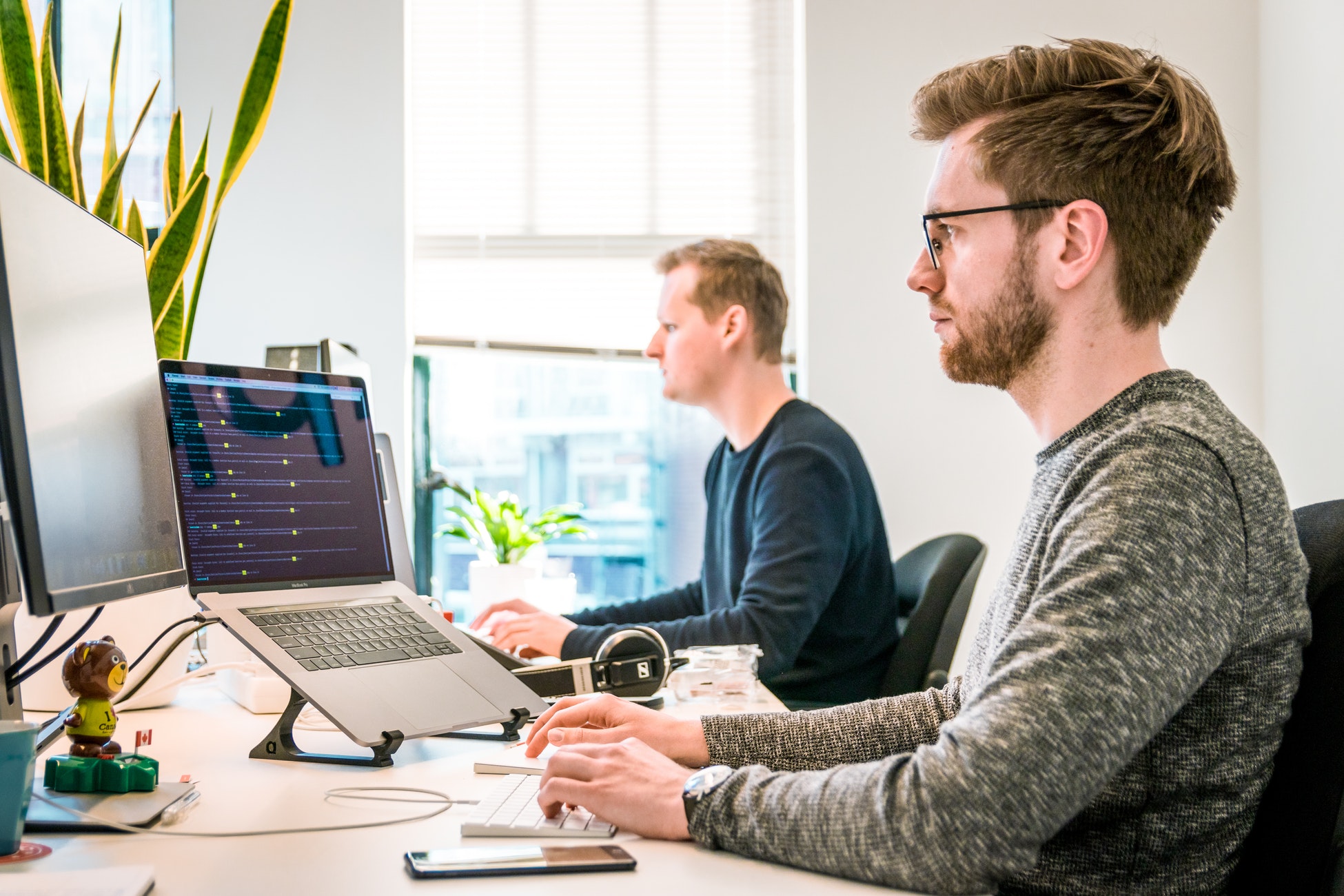 THIS ARTICLE WAS ORIGINALLY WRITTEN BY SÉRGIO ESTRELLA, DESIGNER FOR TOPTAL

Sketch, a well-established design tool, has enjoyed phenomenal growth since its introduction in 2010. In 2016, Adobe introduced XD as a formidable competitor. After nearly three years of development, does Adobe XD offer enough of a challenge for designers to consider a change?

The UX design process is complex and requires the use of specific tools, methodologies, and frameworks. User research, analysis, wireframing, mockups, iteration, usability testing, and UI prototyping are just a few of the artifacts and processes designers work with while communicating with developers, stakeholders, and other team members.

Sketch has become the de facto standard for a large majority of digital designers due to its simple interface, expansive number of plugins, complete toolkit functionality, and frequent updates.

While Sketch became the tool of choice for UX designers, Adobe, long known for their award-winning design software and deep ties to the design community, did not have a similar option. They had Photoshop, Illustrator, and Fireworks, but designers had no appetite for using three tools to accomplish tasks that Sketch could provide in one application.

In 2016, Adobe introduced XD (Experience Design). A serious contender to Sketch, they still had a lot of catching up to do. At the time Sketch was six years old, had a wide user base, and an entire ecosystem of plugins, making it a powerful design tool. The rivalry escalated over the next two years and Adobe XD grew from a nimble competitor to a highly regarded design tool that has won over many professional designers.

The Toptal Design Blog published an article about Sketch vs Adobe XD in 2017 when it was still in beta. Now, two years later, Adobe XD has seen multiple revisions with a clear objective: Offer everything a UX designer needs natively, and with great performance.

Is it time for UX designers to switch from Sketch to Adobe XD?

Let’s explore how Adobe XD compares to Sketch. We will compare the following features:

Designers who are familiar with tools like Photoshop shouldn’t have a problem learning Adobe XD or Sketch since they all share a similar UI. 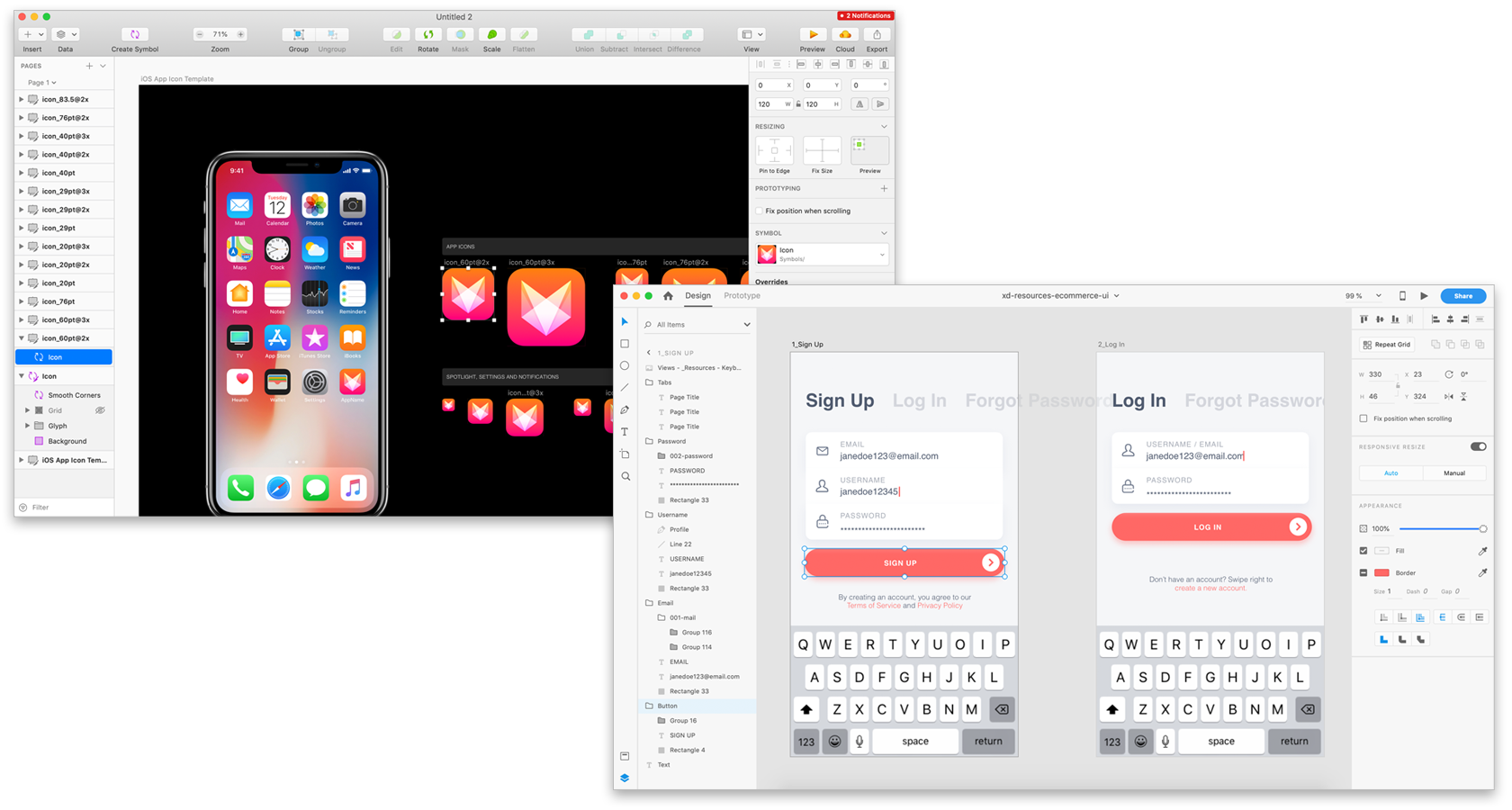 Adobe XD and Sketch share a similar user interface with the exception of a few elements that differ between the two.

One notable UI difference is the absence of a Toolbar in Adobe XD. The Toolbar, located at the top of the UI, is a useful feature in Sketch with customizable shortcuts to commonly used functions and tools, such as grouping objects. Adobe offers a similar, scaled-back feature called the toolbox, located on the right-hand side of the software.

Sketch vs XD: Sketch has the edge for its helpful Toolbar.

A notable feature in Adobe XD is the repeat grid. This is a handy tool that allows for the easy creation of adjustable lists and grid-based screens. While Sketch lacks this feature, it can more or less be replicated with plugins.

The Repeat Grid feature in Adobe XD allows for the quick creation of lists and grid-based screens.

Sketch vs XD: Adobe XD has the edge with the repeat grid which is native to the software.

Symbols were an early feature that had a significant contribution to the success of Sketch. Symbols are to Sketch like CSS (Cascading Style Sheets) is to website design. They allow designers to easily reuse and mass-edit assets which saves a lot of time, helps create a ready-made design system, and provides for consistency across all screens.

Sketch’s success was due in large part to the symbols feature. Adobe XD offers up a similar feature with asset panels.

Adobe started with basic symbols and then introduced the assets panel which combined symbols, fonts, and colors into a single location. Editing any of these elements shows the resulting updates in real-time. Sketch does have these features, but Adobe XD has provided a more cohesive and improved user experience.

Sketch vs XD: Adobe XD has a slight edge due to the combined UI elements within the assets panel.

This is an incredibly useful feature which can be turned on and off using a simple slider button. If the auto-mode falls short of its expected behavior, a designer can change the responsive properties manually.

Sketch doesn’t have this feature built-in, but it has many plugins like the Anima Toolkit that do the job well.

Adobe XD offers a robust and automated responsive design system which Sketch lacks without the use of plugins.

Sketch vs XD: Adobe XD has the advantage here. They offer a built-in way to see responsive effects on the UI elements.

The plugin ecosystem within Sketch is arguably one of its greatest features. There are hundreds of plugins which extend the functionality of Sketch, and allow designers to use enhanced features while staying within the Sketch ecosystem.

Add-ons are the Adobe XD equivalent to plugins. Adobe started their add-on ecosystem in 2018, so it is not as robust as Sketch. That isn’t a concern to Adobe since their goal is to try and reduce the need for add-ons, and focus on making features that are built-in to the software.

Sketch vs XD: Sketch has the advantage with their extensive library of plugins.

Adobe recently updated XD with an incredibly useful feature for UX designers: auto animate. It works by making clever, smooth transitions between elements of different screens. The results are impressive, making prototyping a delightful experience with which to engage potential clients. Sketch does not offer this functionality, even with a plugin.

Another great prototyping feature Adobe introduced is support for micro-interactions, for example, pulling a panel from the edge of the screen or making a keyboard appear. Adobe XD also supports prototype voice-based UIs (like Alexa or Google Home actions).

Sketch vs XD: Adobe XD has the advantage here with time-saving auto-animate features and support for micro-interactions which Sketch lacks.

Designers frequently engage with other team members, developers, and stakeholders—the ability to share designs and receive feedback is a crucial part of the design process. As such, Adobe XD includes built-in functionality for mockups and prototypes to be shared online so anyone can add general comments, or point to specific locations on a layout and leave feedback.

These features, combined with Adobe XD’s dynamic prototyping mode, can also be tested on mobile phones with the native Adobe XD app, or even recorded for non-interactive demonstrations.

Sketch can make use of sharing and commenting using collaboration tools like Zeplin or integrations with 3rd party tools such as Invision.

Sketch vs XD: Adobe has a slight edge here with built-in online sharing and commenting.

Over the course of a design project, UX designers often need to share design specs with developers. Adobe included this functionality in XD, while Sketch users will need to use integrations such as Zeplin or InVision.

Sketch vs XD: Adobe has an edge over Sketch because design specs are built in and do not require third-party integration.

Two important features designers and developers rely on are version control and real-time collaboration. Large design teams that work together on the same project need to be able to see when changes have been made, and access a history of those changes.

Adobe addressed collaboration with the introduction of cloud documents. This gives everyone on the team, including developers, a central place to work. According to Adobe, the next step for the cloud documents feature will be version control.

Sketch offers version control and real-time collaboration with plugins, but these features are not built into the product.

Sketch vs XD: Sketch wins this one. They have version control, albeit with plugins; this is not currently offered in XD.

There are similarities as well as differences between the current version of Adobe XD and Sketch. Here is a comparison of each product:

Is It Time to Change UX Design Tools?

Comparing features, Sketch and XD are close. Sketch lacks some features like auto-animate, auto responsive design, and the repeat grid that are all native to XD.

The only important thing that Adobe XD still lacks is version control, which Sketch has thanks to plugins. Expect this to arrive in XD soon as Adobe continues developing the cloud documents feature-set.

It’s easier to transition from Sketch (and Photoshop or Illustrator) to XD than the other way around, as XD can open Sketch files with excellent fidelity. You could experience some issues if you depend on Sketch-only plugins like Abstract or InVision Craft.

In some scenarios, the choice is obvious: for Windows users, Sketch isn’t available, and for Adobe Creative Cloud subscribers, XD is included for free with unlimited shared prototypes. That did not happen by accident.

But Sketch is fighting back. The company recently closed $20m in funding, and promises important features like team collaboration, native handoff and a web version of the app in 2019.

If version control isn’t a critical issue, then it’s never been a better time to consider using Adobe XD. Adobe’s commitment to the user experience design community is apparent with features like auto-responsive mode, repeat grid, and built-in prototyping. Despite their late start, Adobe has proven they can provide a formidable challenge to Sketch.